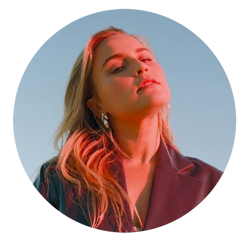 We are thrilled to have Singer-Songwriter Jack River hosting a JMC Exclusive Music Masterclass!

Jack River, the moniker of Holly Rankin, is an Australian songwriter, producer and climate activist making grit and glitter fuelled music for the revolution.

Following the release of her ARIA-nominated debut record Sugar Mountain, and her Peking Duk collaboration - Sugar, River has toured extensively playing to sold-out headline shows around the country. Kicking off the new decade River released a follow-up EP Stranger Heart with neon-lit singles Later Flight and Dark Star. In between touring and recording, she is the mastermind behind Grow Your Own Festival in her hometown of Forster which celebrates music, art, food and agriculture of the region.

This masterclass will take you through the key experiences, decisions and personal processes that have made Jack River's career to date. She will talk about her journey so far in the music business, finding and trusting your vision, finding the right team, big mistakes and why they are so important, and the importance of independence on all levels of your career. Don't forget to bring your questions to a 30 Min Q+A following the Masterclass.