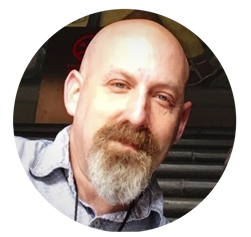 An award-winning screenwriter, screenwriting instructor, and all-around film lover, Benjamin Sztajnkrycer is our latest Masterclass Host ready to grant an all access pass into the film world!

Ben Sztajnkrycer is a veteran screenwriter in the United States and Canada. He has written features for such companies as Appian Way (Leonardo DiCaprio’s production company), Impact Pictures (producers of the billion dollar “Resident Evil” franchise), and Revelations Entertainment (Morgan Freeman’s production company). He has also written Canadian content films for distribution through outlets including Sony Pictures, Syfy, and ION Entertainment.

In addition, Ben has worked as a creative executive at Walt Disney Feature Animation, where he contributed to the development of titles including “Frozen” and “Lilo & Stitch" and has taught screenwriting since 2009!

Now the head of the Screenwriting Faculty at the Columbia College Hollywood, Ben is only the best person to talk us through the ins and outs of writing for screen and how to enter the world of screenwriting internationally. Join Ben and learn all about how writers working in Hollywood develop their careers, aspire towards reaching the 'Hollywood Writers Room" and naviagting ways to let your work speak for itself. Understand how to balance relationships with managers and talent agents to get your next green-lit project in just over an hour!

Stick around for a dedicated Q&A with our Melbourne Head of Film Peter George and get all your burning questions answered.