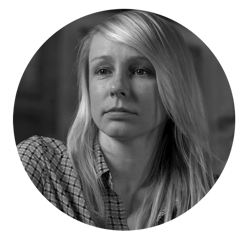 Welcoming Kitty Green to our JMC Exclusive Masterclass Series for a deep dive into the world of filmmaking you won't want to miss!

An Award-Winning Australian filmmaker, Kitty Green is the epitome of success within the film industry, adorning the hats of director, writer, editor and producer throughout her career and cementing her place as a leader in documentary filmmaking.

In 2012, Kitty spent a year in her grandmother’s native home Ukraine shooting with the provocative protest movement Femen. Her independent feature documentary, ‘Ukraine Is Not A Brothel’ premiered at the Venice Film Festival in 2013 and screened at over fifty film festivals internationally and won the AACTA award for Best Australian Feature Documentary in 2015. The same year, Kitty’s documentary short, ‘The Face of Ukraine: Casting Oksana Baiul’ premiered at the Sundance Film Festival where it was awarded the Non-fiction Jury Prize. The film made its European premiere at the Berlinale.

Kitty’s hybrid documentary feature ‘Casting JonBenet’ premiered at the Sundance Film Festival in 2017 and is currently streaming globally on Netflix as a Netflix Original. It was awarded the 2018 AACTA award for best Australian Feature Documentary. In 2018, Kitty was a Sundance Institute Fellow as part of the ‘Art of Nonfiction' initiative. Kitty’s first narrative feature, ‘The Assistant’ was completed in 2019 and premiered at the Telluride Film Festival, before screening at Sundance and the Berlinale in 2020 and was released theatrically in the US in January. Kitty shows no signs of slowing down and we are thrilled to have her join in our Masterclass series.

During her talk, Kitty will delve into her personal journey, her takeaways from each stage in her career and the inspirations she found to film such strong pieces. She will expand on how her involvement with Femen subsequently brought about her documentary “ Ukraine is Not a Brothel” and how this led to her journey to directing “Casting Jon Benet”. Learn of the nitty-gritty elements behind the scenes including funding and distribution structure, working with actors, production collaborations and the “casting” conceit of her film. Looking beyond the struggles of COVID-19, Kitty will express her interpretation of the industry and why entering the film industry with big bright new ideas will pave the way development and opportunity for you as a professional.