Led by Australian Producer, Singer, Songwriter, Graphic Designer and Photographer, Michael Carpenter, this masterclass will explore a variety of avenues to get students started on their careers outside and during their Uni degree.

First up Michael will cover general concepts such as developing your public profile, showreels, social media perceptions and strategies, through to some financial basics when starting your own business, including learning how to charge for your services and being aware of your tax and debt commitments. Lastly, he'll discuss the psychology of dealing with clients, building a client base, and refining your professional practices. The 2-hour class will conclude with a thorough Q and A, so bring along your questions! 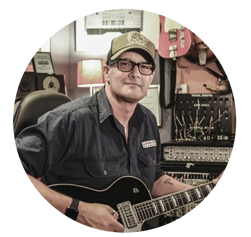 Michael Carpenter is a creative in every sense of the word. He’s been playing gigs as a musician for over 35 years, but has been running his own recording studio and producing records since 1991. He has also released records as an artist/singer-songwriter since 1999. Additional to this, he’s been doing graphic design since 1998, and making music videos and doing artist photography since 2008. He is a true multi instrumentalist, and an in-demand sideman in both the pop and country music scenes. He’s been a regular contributor to Audio Technology magazine since 2007, and lectured at JMC in the Audio Department from 2007 to 2016. He currently runs and works from his Love Hz Studios in Leichhardt, where he has been since 2004.